Answer:
Baking soda and baking powder, although very similar, are different enough to completely ruin your recipe if you get them mixed up and use the opposite one. Allow us to explain all the differences in both composition and usage of these two white substances that are indeed easy enough to mix up. 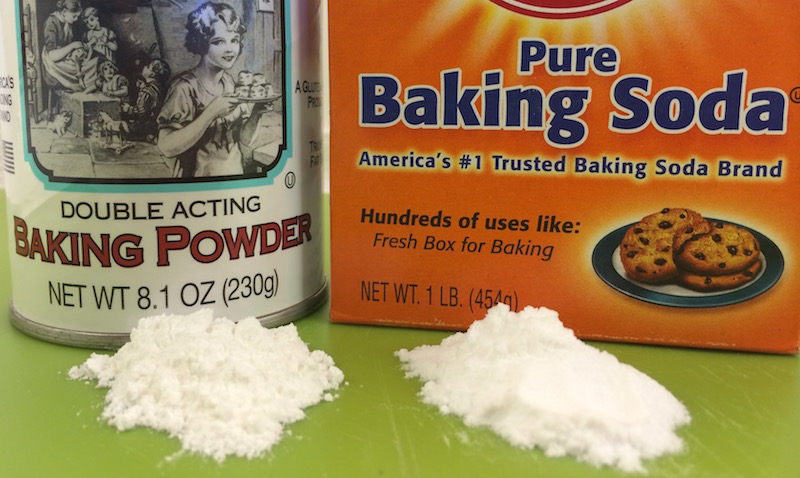 The most important thing to remember when using baking soda is that it is a base, meaning that it will taste bitter unless it is combined with a an acid. Baking soda needs both moisture and an acid component in order to force a reaction. When baking soda is mixed with a moisture and an acid a chemical reaction occurs which produces Carbon Dioxide that expands with heat. The rising process begins immediately upon mixing, so it is important to begin baking the mixture right after mixing the baking soda with the moisture. If you don’t, then the rising process will begin and then stop without the quick introduction of heat – resulting in a baked good that falls flat!

Common liquids that are mixed with baking soda to begin this reaction include (but are not limited to) yogurt, melted chocolate, buttermilk, honey and molasses. If you omit the acid, your cookies will taste bitter and quite possibly be inedible. The alkalinity also enhances browning reactions which add color and flavor. Baking soda is generally called for in cookies.

Baking Powder is comprised of Sodium Bicarbonate, Cream of Tartar (an acidifying agent) and starch (a drying agent).

Recipes calling for baking powder generally also call for other neutral ingredients as the liquid, for instance milk. For the lightest cakes, you will also want to bake right after mixing. Baking powder is usually called for in cakes and breads.