QUESTION:
Can you Bake Potatoes on the Grill?

ANSWER:
Yes, for sure!

Why heat the oven (and therefore the kitchen) during the summer when you can do everything outdoors? Potatoes can easily be baked on the grill. They don’t take up that much space as they can even be placed around the edges of the grill to cook along with whatever is placed directly on the fire (as long as the grill is covered).

Grilled baked potatoes are also an easy option to make while camping, since they transport well to the campsite without requiring cooler space. 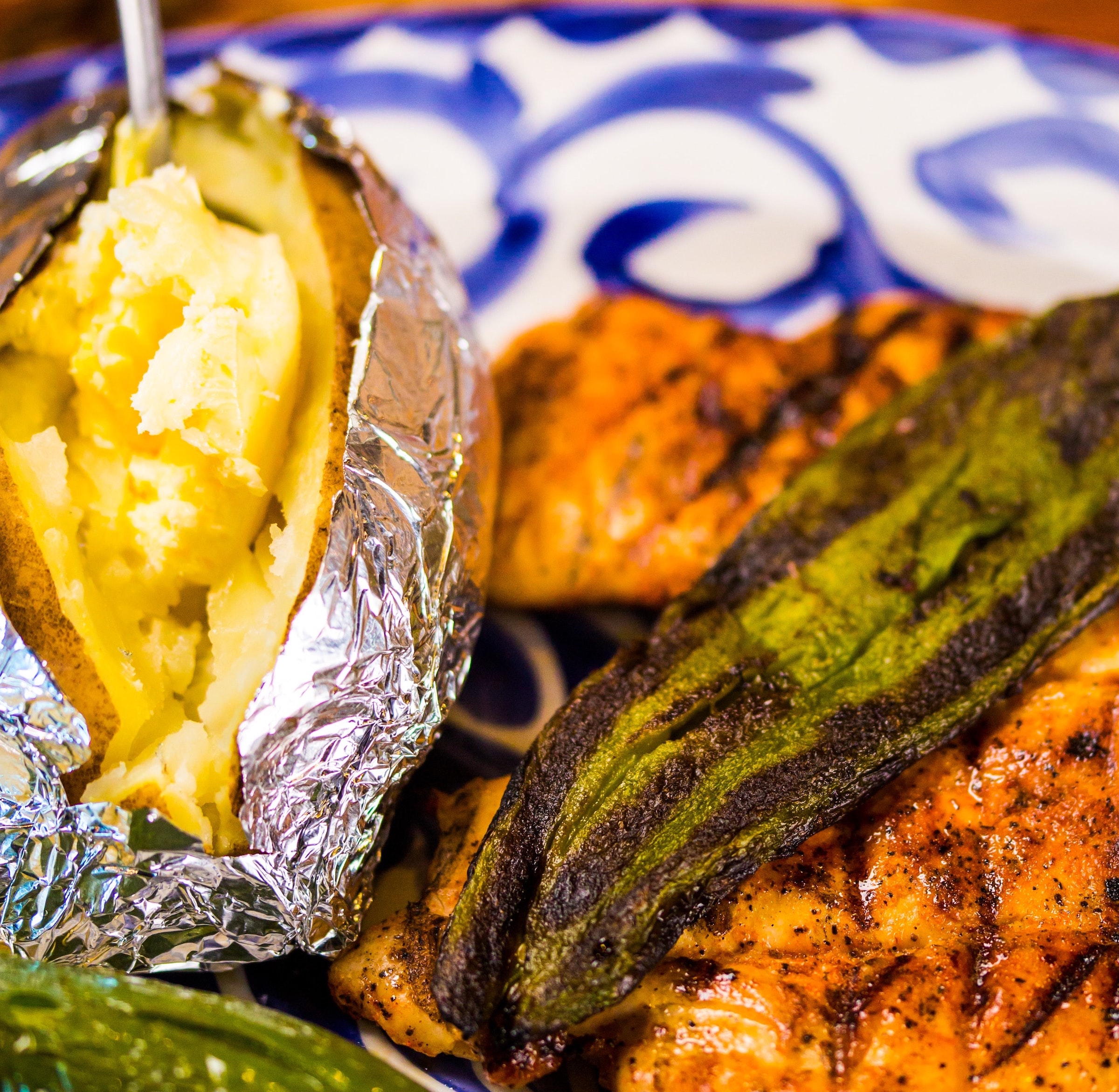 Baked Potatoes on the Grill

The great thing about baking a potato is that it is kind of hard for things to go wrong and mess up the baked potato recipe. If it’s under cooked, it will be hard and not have as much flavor. But, if it is over cooked there’s really no problem at all. An over cooked potato will be softer, which is usually considered a good thing, but will be every bit as tasty as if it were cooked perfectly. It’s also pretty hard to burn a grilled baked potato, as long as it is properly wrapped in aluminum foil and the fire is controlled.

How long to bake a potato on the grill?
Potatoes baked on the grill will take about an hour to cook, depending on the size of the potato and the heat of the grill. This baking time is for a common 8-10 ounce potato, so give or take from the time if you have tiny or huge potatoes to bake.

How to bake potatoes on the grill?
1) Wash and then dry the potatoes before wrapping them individually in aluminum foil.
2) Then simply place the packages on the grill. Rotate them a few times during cooking to ensure an even bake. It doesn’t get much easier than that!

In a hurry to make grilled baked potatoes?
If you don’t want to keep charcoal going for the time it takes to bake a potato, then try this trick. Pierce one side of each potato with a fork a few times and place them individually into the microwave for about 2 minutes each.
WARNING: Make sure this is before wrapping it in aluminum foil!
This pre-cook will allow the grill time to be reduced, but still allow enough cook time on the grill to grab a little extra bbq flavor.

How to tell when a grilled baked potato is done?
Grab a potholder and give the potato a gentle squeeze. It should give and form an indentation from your fingers. The other way is to see if it can be easily pierced with a fork, but this requires opening the tin foil package in order to avoid shreds of aluminum entering the potato (rare, but it does happen).

Another convenience of grilling a baked potato is that it can be baked at most any temperature. If the grill temperature is already set for another part of the dinner, simply adjust the placement time accordingly for the potato to cook.

See our guide to making a perfectly baked potato here.

Warning – if your potato is green, read our green potato FAQ post before using that potato.