Properly defrosting a turkey is indeed a crucial first step before cooking a turkey.
Cooking a frozen turkey, or even one that has been partially defrosted, is never a good idea. 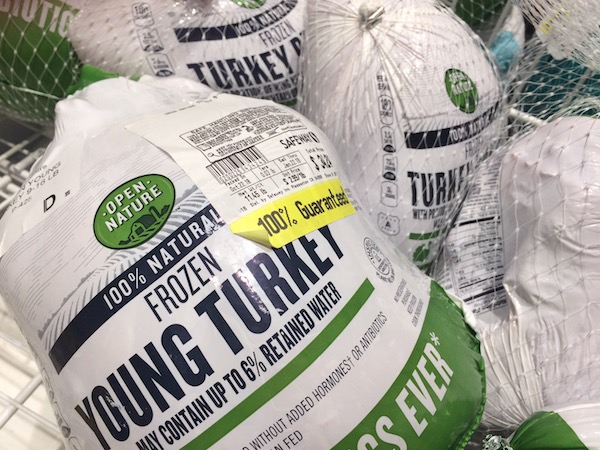 Why to Always Defrost a Turkey

Cooking a frozen turkey does not make any sense.
Here’s what would happen: The oven would work hard on heating up the frozen mass in the middle while putting the rest of the bird in jeopardy.

A turkey breast is fully cooked when the breast reaches an internal temperature of 165°F and the thigh registers 175°F. This takes about 3 hours for a 10 to 12 pound turkey. That’s for a fresh or fully defrosted turkey.

If the turkey is frozen, this would take at least 50% longer to achieve. As the heat is working on the massive ice block in the center of the turkey, the meat and skin near the edges (which would already be partially defrosted) would then be baking for 4 to 5 hours for that same size bird. This would leave the outside meat, normally desirable pieces such as the outer breast and legs, with a consistency more like shoe leather than moist turkey meat.

Or, put another way: “While the heat is trying to work on the large mass of cold, the parts that aren’t frozen are going to grotesquely overcook” says Food Network Star Alton Brown.

So, plan ahead and always properly thaw a turkey. Always allow a turkey proper defrosting time prior to cooking. About 24 hours in the refrigerator for every 5 pounds of bird should be a sufficient amount of time for defrosting. It will be time well spent. For a speedier defrosting method and a chart of thawing times based on the size of a turkey, see our thaw a turkey post.

Defrosting a turkey is one thing that needs to be done prior to Thanksgiving. For a list of several other things that can be completed before the big day, see our day before post.

For tips on keeping turkey moist, see our moist tips.

To find out how long turkey lasts, check out our turkey page.