Answer:
Lots of questions surround double yolk eggs. Let’s explore some of them and find out all about double yolks.

How is a double yolk formed?

A double yolk egg is formed when two ovulations occur at close to the same time and then travel down the oviduct together, and thus both get encased in shell.

Is a double yolk egg safe to eat? 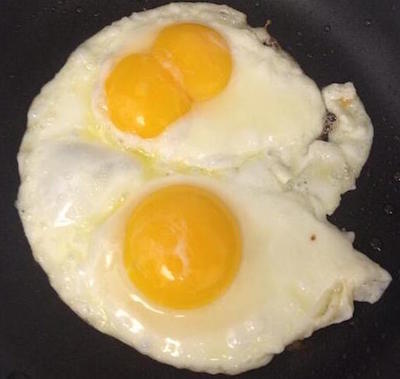 Is a double yolk rare?

These eggs came from a carton of jumbo eggs we purchased from Trader Joe’s. All but two of the eggs from that recent carton purchase were double yolkers!

Is a triple yolk possible?

A triple yolk egg is rare but they’ve been found, as have other multiples. The most yolks ever found in an egg was 9![1]

Yolk color depends greatly on the diet of the hen. If she eats plenty of yellow-orange plant pigments, such as from marigold petals and yellow corn, the yolk will be a darker yellow than if she eats a colorless diet like white cornmeal. Artificial color additives are not permitted in eggs.

To find the shelf life of eggs, see our egg page.

To find out if bloody eggs are safe, see our post on blood spot eggs.