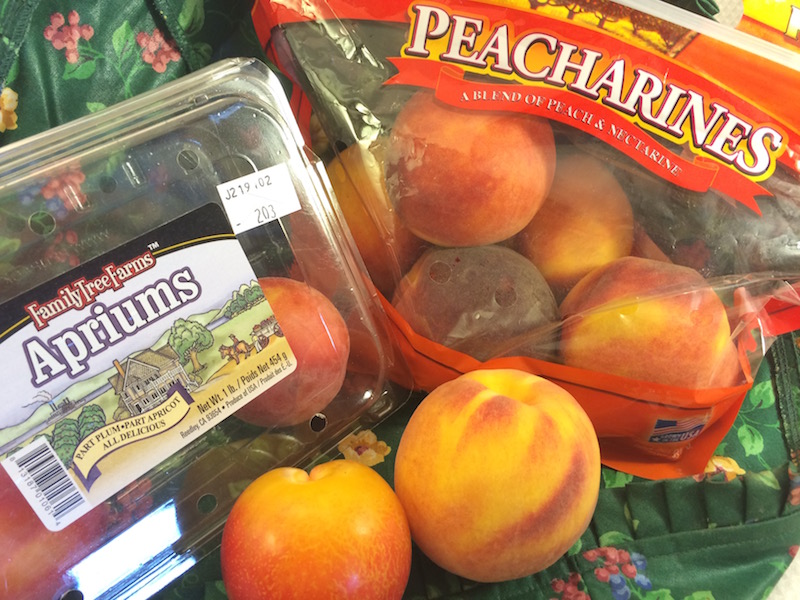 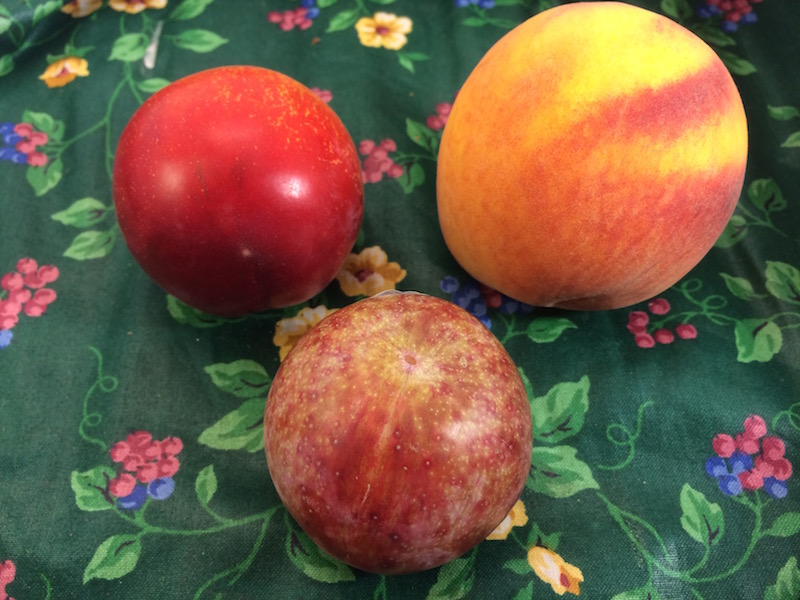 First of all, when searching through your local fruit stand or farmers market, you should note that whichever fruit is more dominant in the mixture of a particular hybrid fruit will have the beginning part of the name. With this in mind, you will notice that the pluot (front & center in the picture) is a plum/apricot mixture that more closely resembles a plum in both color, texture and taste whereas an aprium (on the left) looks closer to an apricot. But, looks can be deceiving. Furthermore, since genetically crossed hybrid fruit and vegetable names are granted after a patent application [1], you can often find multiple names for mixes of the same fruits. 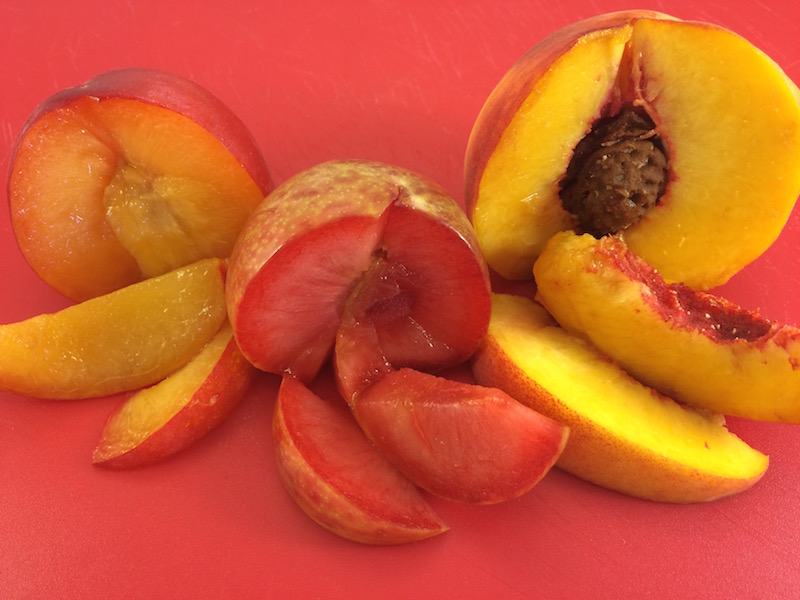 The aprium (on the left in the picture) is an apricot/plum mix that appears more related to the apricot, but actually still reminds us more of a plum than an apricot. Although the flesh is a yellower color, the texture is still plum-like. The skin of an aprium (sometimes called apriplum in other packaging) still has that slightly bitter taste and toughness found in a plum and not an apricot. The texture of both the flesh and the skin are reminiscent of the plum. The flesh also clings to the pit, again like the plum and not the apricot. In our opinion, we prefer to stick with the pluot over the aprium. If we want more apricot, we’ll reach for an actual apricot.

Although a peach is not really all that different than a nectarine in color, flavor, size or texture; the biggest difference between a peach and a nectarine is the skin. We found the peacharine skin to be slightly fuzzy like the peach, but not as thick or tough as peach skin. So, a peacharine experience is like eating a peach where the skin does not bother you. Eating a peacharine was very pleasant and ours were freestone, which made for nice sampling.

This fruit is also called plumcots or Dinosaur eggs (Dapple Dandy variety) and is pronounced in more varying ways than most any other hybrid fruit, as it has also been around the longest. They have interesting skin coloring that is thinner than a plum. These fruits are more plum than apricot but enjoy a sweeter taste than a plum.

These fruits are actually Fuji or Gala apples that go through a special processing where they are soaked in a solution of water and concord grapes. Grapples then smell like grapes and taste a bit like grapes, but retain the appearance and all other qualities of apples.

This hybrid fruit was named after its sweet taste instead of combining the fruit names, but maybe that’s because they are all grape – actually two different varieties of grapes combined. These grapes really taste just like cotton candy from the fair, with no added sugar!

To find the shelf life of fruits, see our fruit page.