I think you can tell which is which in this picture. If you need help, then take note of the best by dates stamped on each package. The “expired” Craisins, at over two years past their optimal quality date of 05/22/14, are really showing their age.

Are these “expired” Craisins still safe to eat? Let’s check it out. 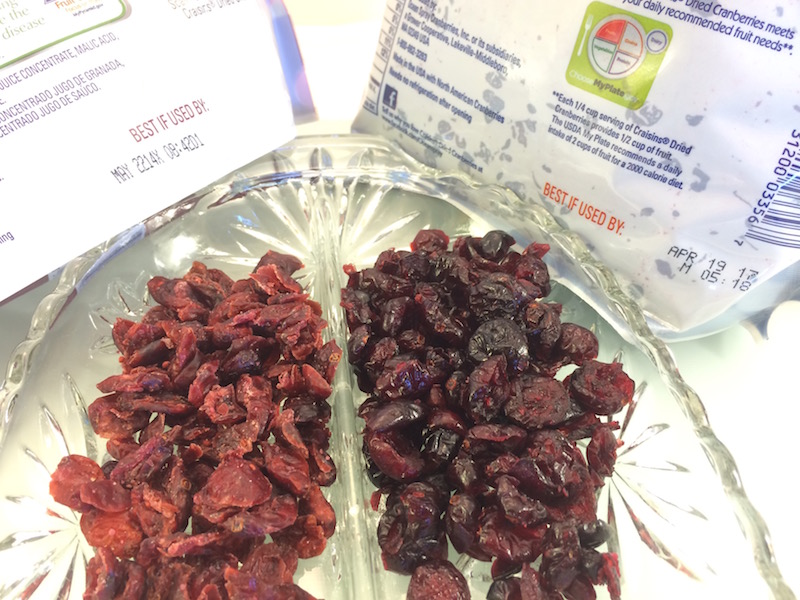 I’d been using the “expired” Craisins on the left for awhile in dishes like oatmeal and baked goods where they absorb a little of the liquid in the recipe. I’d even stick them in when making biscotti where the cookies are dry anyways, so the “expired” Craisins fit right in. But, I hadn’t grabbed a handful to munch on for quite some time. Since I was getting to the bottom of this “expired” bag, I recently purchased a new bag. It was when I sat the contents of the two bags side by side that I decided to do a taste test. The bag in question had been stored properly and kept dry and free of contaminants, so here’s what we found.

Who knew that Craisins were supposed to be so plump & juicy? We had actually forgotten. OK, juicy is an inappropriate term when speaking of dried fruit – there was no juice whatsoever, but when comparing the contents of these two bags side by side that is the term that came to mind. The “new” ones were plump & juicy and the “expired” ones were flat & leathery. The “expired” ones felt harder, looked lighter in color and basically tasted of crystalized sugar.

Cranberries are not the sweetest fruit, so sugar is added when making Craisins (as it often is in many dried fruits). This sugar crystalizes over time, accounting for the change in color and texture. There’s now a white textured coating on the contents of the older package. So, because of these noticeable differences in the more than two year old Craisins, we decided to make a big batch of scones to finish up these “expired” Craisins before they get any older. Meanwhile, we’ll be snacking on the new bag!

If you’re looking for a way to keep your dried fruits longer, the freezer is a good option if you use freezer safe or vacuum sealed bags.

Another popular dried item is corn, check out what we found when we popped extremely “expired” popcorn.