There’s another new probiotic in town and it’s called Kefir. Kefir is a cultured milk product (basically, fermented milk) that is thicker than milk and thinner than yogurt. Some kefir labels refer to the product as a “cultured milk smoothie”, “probiotic smoothie” and even the “Champagne of milks”. This cultured milk product was first made thousands of years ago in the Caucasus mountains [1], but is now making a splash in the United States.

Kefir was actually invented as a way to preserve milk.
It is made from soaking little kefir grains, or blobs of a combination of yeast and bacteria, in milk. The resulting beverage tastes and smells slightly sour and slightly yeasty, which leads into the next bullet.

Kefir is very low in lactose and high in calcium, amino acids, B vitamins and protein.
Kefir grains eat lactose to survive, eliminating lactose from the milk once the grains are removed from the milk.

Kefir contains plenty of good bacteria that aid digestion and promote an overall healthy gut.
There are actually billions of probiotics within a bottle of kefir milk.[2]

Much of the kefir products found in stores are sweetened and flavored with fruit.
As with yogurt, beware of the extra sugar being consumed along with the probiotics. Kefir can also be found plain.

Kefir is generally made using organic milk.
Yet any type of milk can be used. It’s available made with goats milk, almond milk and coconut milk (to name a few). Kefir water is also available, but contains far less probiotics than kefir milk.

Uses include anything that can be done with milk or yogurt.
Drink it plain or add it into smoothies, baked goods, pancakes and such.

Some kefir is made with yeast and some without (for instance Green Valley Organics).
If it does contain yeast, it then has a slight effervescence. This is why it is sometimes referred as the “champagne of milks”, since fermented yeast will contain a trace of alcohol (usually between .08% and 2%).

The grains can be purchased separately and then mixed with milk to make kefir at home.
Once a batch is done, generally within 24 hours, it should be removed and then placed into a fresh batch of milk from which to feed on the lactose.

Kefir grains are not actually grains.
They are only called grains because of the resulting appearance of the formed culture.

Kefir grains should be kept away from direct sunlight.
Kefir milks should be refrigerated.

Kefir grains can be used indefinitely to produce kefir milk.
Kefir grains are self-sustainable, growing and making new grains whenever they’re fed. If the kefir grains are strained and removed after each culturing and placed into fresh milk, then the grains will remain strong and live on indefinitely. If they don’t get food (left in one batch of milk for too long), they will die. For long term storage, kefir grains should be properly dried.

Starter kits are also available to make homemade kefir milk.
Powdered starter kefir will eventually stop producing cultures after two to seven cultures are produced. The exact number of successive batches depends upon the freshness of the kefir and the hygienic practices that were used when handling the powder.

Bottled kefir milks are best consumed by the date printed on the label, regardless of when they were opened.
The drink will become slightly less beneficial as time passes beyond the printed date, but since kefir milk is already soured it has a much longer shelf life than fresh milk. 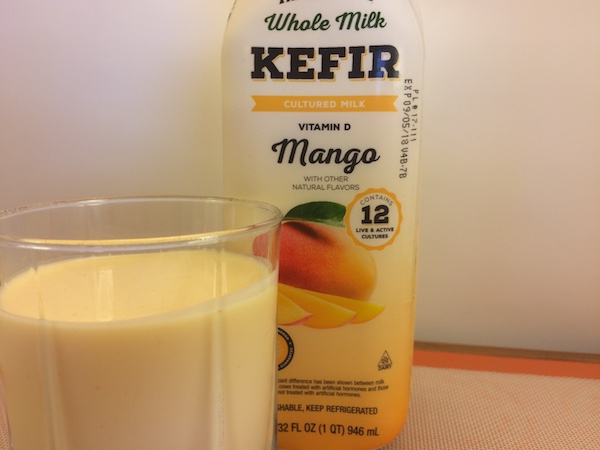 Kefir can be frozen, but will separate when frozen.
The probiotics will become dormant when frozen and then alive again when thawed. The best way to freeze kefir is to pour it into ice cube trays and then blend the product when ready to drink. If a bottle becomes frozen, be sure to shake the container well (with the lid secure) after thawing and before serving.

Hope this helps to answer the question of what is kefir.

For more on the shelf life of kefir, see our kefir page .

Since yogurt is a similar product, this article on yogurt cultures might be of interest.