Question:
Does cake need to be refrigerated?
Is it necessary to refrigerate cake?
Can you freeze cake?

Answer:
Unfrosted cake does not need to be refrigerated.
Frosted cakes, on the other hand, may need to be placed into the refrigerator for extended safe keeping. Let’s take a closer look at the ingredients in the cake frosting to fully answer these questions about whether or not cake needs refrigeration. 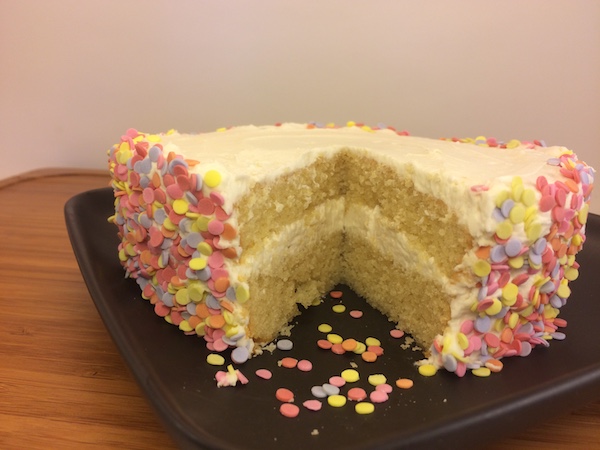 How to Safely Store Different Types of Cake

A plain old normal cake, whether homemade or from a mix, will be fine on the counter for several days.
It will also be fine in the refrigerator for a few days beyond that, although we generally don’t recommend the refrigerator for baked goods because of the moisture situation. It will also be fine in the freezer for several months. Yes, cakes are versatile. The answer to the question of does cake need refrigeration becomes more complicated when the cake is frosted. Since a cake is really not a cake without frosting, here goes the answer and explanation.

If the cake is frosted with whipped cream, refrigerate immediately after each serving.

If the cake was frosted with frosting from a can, it most likely contains preservatives.
Although the FDA banned the use of trans fats (partially hydrogenated oils or PHOs) by June 18,2018 that date has been extended to January 1, 2020 for most uses of trans fat and January 1, 2021 for certain petitioned uses.[1] So, canned frostings may have trans fats, or an alternate preservative, for some time to come. Because of this, a cake frosted with canned frosting is safe (although probably not desirable health wise) on the counter for about three to four days. Since most cakes don’t last that long without someone indulging and finishing them off, it is safe to say that a cake frosted with canned icing is safe to eat if left on the counter, as long as it has been properly covered to keep out contaminants.

If the cake is called an “IceBox Cake” then it belongs in the refrigerator at all times.

If the cake is called an “Ice Cream Cake” then it belongs in the freezer at all times.
Although, allow it to sit out on the counter for about 15-20 minutes before slicing so that a sharp knife will pass easily through to cut the cake.

The question of whether a cake is shelf stable gets blurrier when the frosting ingredients are also in question.
Any frostings that are made with eggs, milk, cream or cream cheese (all moist ingredients that definitely need refrigeration) will then force a cake into the refrigerator for safe keeping beyond a day. Normally we say only two hours is the safety net for leaving these types of foods on the counter, but the sugar in the frosting will help preserve these other ingredients and slightly extend the safety net of frosting. Storing cakes with these types of frostings in the refrigerator will prevent the risk of bacteria growth and possible food poisoning. It will also keep the frosting from melting on hot days.

This red velvet cake frosted with typical cream cheese frosting was left out on the counter for five days.
Note how the frosting has become yellowed and the texture looks separated and shapeless (mushy). The frosting ingredients have also seeped into the cake, visible in the the darker red areas of the cake. This cake should have been refrigerated because of the cream cheese in the icing, and now the ingredients have been compromised with time on the counter. 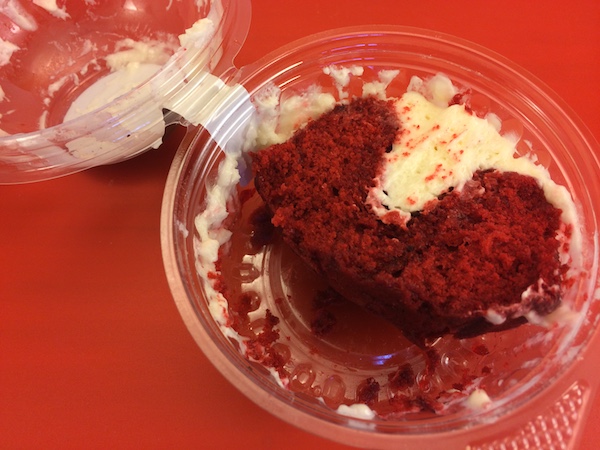 Not only should cake frostings be considered when answering the refrigeration question, but don’t forget about cake fillings.
Anything that may be between the layers of a cake should also be considered when deciding whether or not to refrigerate a cake. If a custard or whipped cream filling was used in the cake, then also place that cake into the refrigerator for safe keeping. Fresh fruits between the layers will also last longer and hold up better if refrigerated.

If a kitchen in hot, refrigerating a cake is a good idea if only to keep any type of frosting from melting.
It may be a question of presentation and not just safety when choosing to refrigerate a cake.

Need to make a cake ahead of time?
Go ahead and bake the cake the day before and cover it tightly in plastic wrap before frosting it. Make the frosting and store it in the refrigerator. Allow the frosting to come to room temperature and then frost the cake the day of the event. Another good alternative is to wrap the cake tightly in plastic wrap and freeze it prior to the occasion, this way it will keep for a few months without drying out. Make the frosting when needed and then frost the cake from the freezer. Many grocery stores use this method for their bakery cakes.

To find out how long cake lasts, see our cake page.

To find out how long butter lasts, see our butter page.

For a longer term storage of butter, see our freezing butter post.