How Long to Marinate Steak?

How to Long to Marinate Steak

Marinades, generally some combination of salt, sugar, an acid and various other flavorings, are used to both enhance flavor and to tenderize beef. Realizing that marinades are generally going to create a nice caramelized coating on the outside of the beef when grilled, and not flavor the center of the slab of meat, is the first step in determining how long to marinate a steak. Generally, this marinating window is pretty forgiving. So much so that many recipes will instruct only to “marinate overnight“.

That being said, the type of steak being marinated should also be considered when determining how long to marinate. Tender cuts of beef, for instance tenderloin, really do better without any type of marinating. Whereas tougher cuts, like flank steak, will be very difficult to chew without receiving some major marinating time. 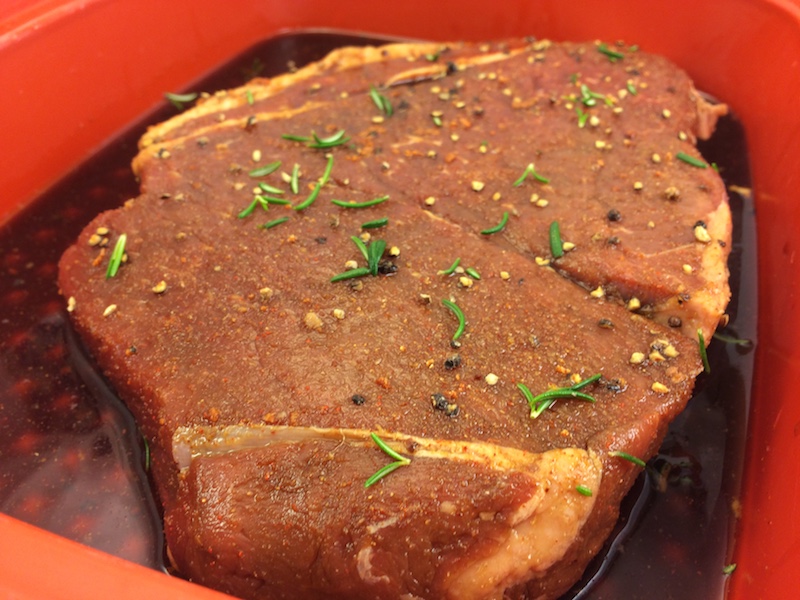 How Long to Marinate Steak

Like we said, many recipes say to “marinate overnight”. What happens if you don’t have that long to wait or you get tied up the next day and don’t even make it to the grill? Either scenario could work out to be OK, but again different cuts of beef will react differently to the marinade. Also, marinade ingredients can have different reactions with the meat.*

For a nice juicy steak originating from the tender portion of the cow (the loin) marinating is not necessary, or even recommended.
It is recommended to only use salt and pepper on tender cuts of steak before grilling or searing. Salt tender steaks only about 30 minutes prior to cooking as they rest on the counter. This is because salt tends to draw out the moisture from the meat, leaving behind a dry steak if it was salted too early. This holds true for cuts of beef labeled tenderloins, top loins, T-bone and porterhouse steaks.

For ribeye steaks, tri-tip steaks and top sirloin steaks marinating can be beneficial to make them as flavorful and sealed on the outside as possible. A marinade will never reach the center of the meat, so poking with a fork will help impart more flavor and tenderize.

For tougher cuts of steak – like chuck steak, shoulder steak, top round steak, bottom round steak, skirt steak, hanger steak and flank steak – marinating is a necessity unless you were blessed with razor sharp teeth.

The USDA says meat can safely marinate in the refrigerator for up to 5 days. [1]
But, let’s be clear, this is an amount of time for food safety and not a recipe for maximum enjoyment of the steak. The steak will be safe to consume after marinating up to 5 days, but the tissues of the meat may be so broken down by the marinade in that amount of time that the texture may be unrecognizable. The steak could be drier or tougher than when it began, depending on the marinade ingredients, after this extended amount of time. Instead, we recommend the following times as a guideline for marinating steak.


* Highly acidic marinades such as those that include salt and/or alcohol and/or too much citrus should marinate for no longer than four hours. After about four hours the acid will begin to chemically cook the the meat, destroying the protein structure. This works out great for a very tough cut of meat like a flank steak, but a tender cut like a ribeye might actually become less desirable after marinating too long.

How Long to Marinate Steak

There are certain precautions that should always be observed when marinating raw meats, be sure to read our instructions on how to marinate before attempting it for the first time.

To find out how long beef lasts, see our beef page.

See our cuts of beef post for help in determining which pieces to select.