This large container of “expired popcorn” takes up way too much space in the cupboard. I guess at more than nine years past its “best by” date, it’s about time that I used up the stuff anyways. I remember using it last year, so let’s give it one more try for todays snack, and probably the rest of the week too.

Here’s what happened when we proceeded. 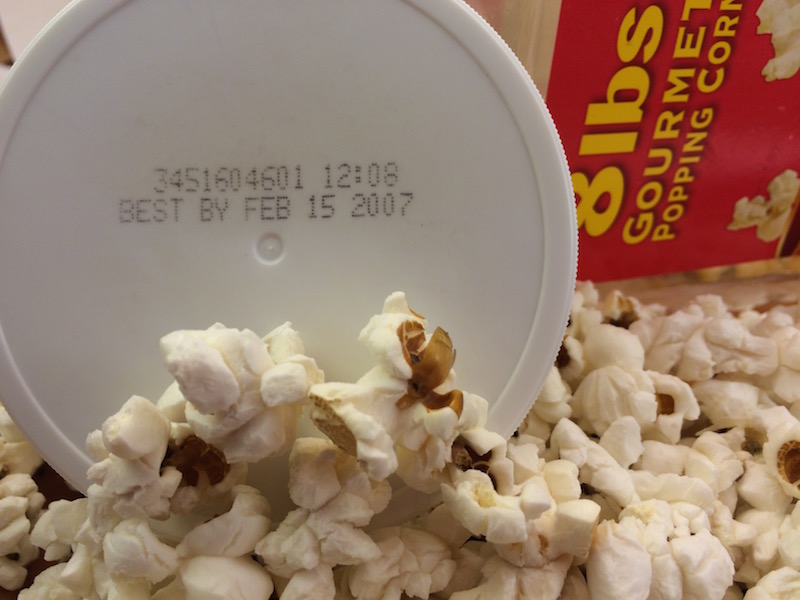 At more than nine years past its “best by” date, it’s time to get this nearly empty container of “expired” popcorn out of the cupboard and into the recycle bin. So, we heated up a little oil in a large pot and proceeded to dump in the popcorn kernels. We knew that many would pop, but were anxious to see just how many would not be able to perform at their full potential after sitting around for so long.

As you can see, we got an abundance of popcorn! Some did not pop, that is true, but only slightly more kernels remained than normally would after popping a “fresh” batch of popcorn. We had enough popcorn for the entire week!

You might be wondering how it tasted? Well, not one taste tester used the words “stale” or “old” as they munched on the snack. They may not have been exactly as white & fluffy as they were ten years ago, but unless compared side by side, the differences were negligible. After all, it was freshly popped!

NOTE: Don’t try this with the microwave popcorn packets. Packages of popcorn that are intended for the microwave contain oils that will go rancid over time. You can usually tell a rancid package when you open the outer packaging and smell something off, also the inside packaging may be developing oil stains.

To find out how long popcorn lasts, see our Popcorn page.