Score! Ham, that is.

First off, what is scoring?
Scoring, in kitchen terms at least, is to make shallow cuts in a diamond shaped pattern.

Scoring is generally done on cuts of meat that have a thick outer layer of fat or fatty skin. This makes the basic bone-in ham, the one most often used for Easter dinner, a prime target for scoring. 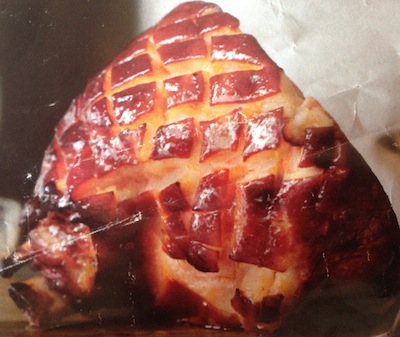 How to Score a Ham

There is no need to flip the ham over, only the fatty side of the ham is typically scored.

The Benefits of Scoring Other Foods

Although ham is a prime target for scoring, lots of different foods can benefit from scoring.

For fatty meats, scoring helps release some of the fat while the meat cooks.

Duck is known for being very fatty, scoring can help alleviate some grease.

For fish, scoring prevents the skin from curling when it hits the heat from the skillet or grill. Only the skin side(s) of a fish are scored.

For flat tougher cuts of red meats, like flank and hanger steaks, scoring helps to tenderize these tougher cuts.

For larger vegetables with tougher skins, scoring allows seasonings and marinades to be more easily absorbed through the skin.

Any glaze or marinade will sink further into its subject and produce more intense flavor if it is scored first.

After scoring, try placing some bits of seasonings into the new crevices for even more flavor.
For instance, garlic and herbs into meats and cloves into hams.

To find out how long ham lasts, see our ham page.

For help cooking a ham, see our how to cook a ham post.

To find out how much ham to buy, see our ham per person post.