According to Webster, the definition of cross contamination is “an inadvertent transfer of bacteria or other contaminants from one surface, substance, etc., to another especially because of unsanitary handling procedures. With raw eggs, as with raw chickens, it is important to avoid cross contamination”. [1]

That “inadvertent transfer” is what good cooks strive to eliminate at all times when preparing foods. Let’s look at some cautionary steps that can, and will, prevent the nasty spread of bacteria in an everyday kitchen. 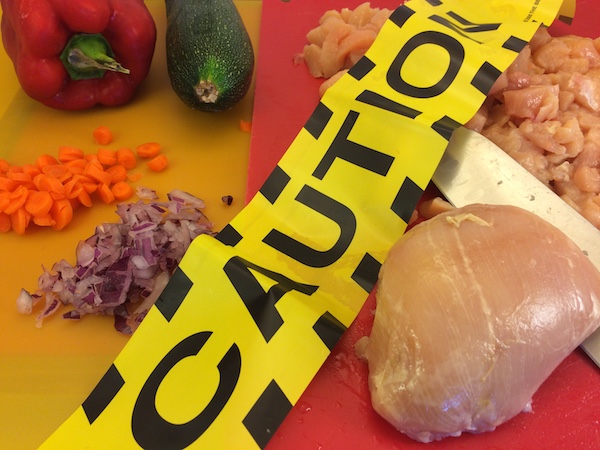 Tips for Keeping a Healthy Kitchen

Salmonella is one of the most common causes of food poisoning in the United States.
This bacteria is commonly carried by chickens, and thus their eggs. Therefore, raw chickens and eggs are some of the biggest concerns in the kitchen – so much so that they are a part of the Webster definition for cross contamination as quoted above. The CDC estimates that there are about 1 million cases of people getting sick from eating contaminated chickens every year. [2].

Although chicken and eggs are the likely suspects, and extra care should always be taken when working with these two products, there are plenty of other contaminants around a common kitchen. Some other foods that require special attention are any type of raw meat and fresh vegetables. Bacteria needs food to grow and especially thrives with conditions of moisture, neutral acidity and warm temperatures. These conditions are all perfect in raw meats, seafood and fresh vegetables.

Beware of wiping hands on aprons and kitchen towels.
Get in the habit of always washing hands (again back to #1) after touching something that could possibly harbor bacteria before placing them anywhere else – including a kitchen towel, apron or clothes. Why? The germs will sit there until you wash your hands and wipe them on that towel to dry, where they will get picked up again once again for further transfer!

Prepare foods at different times, cleaning the area after preparing raw poultry (or meat or seafood) products.
Cutting the raw meats at the same time as the raw vegetables is just asking for trouble, especially if there is more than one cook in the area which adds to the confusion. Even on the grill, placing raw meat next to food that is cooked and ready to be removed from the grill can create a place of possible bacteria transfer.

Another example of cross contamination is when several people are eating from the same container.
Take an ice cream container, for instance. Not only does the ice cream melt and then re-freeze each time it is stuck back into the freezer (making for an icy container of ice cream), but germs (including flu and strep viruses) can be passed via the ice cream container when multiple people are dipping into the container. Remember, freezing does not kill germs it only gives them time to take a nap.

Even just dips at a table can become traps for germs.
There’s a rule in our family – no double dipping! Holding a chip on one end and dipping it into the bowl is OK, but a bitten chip is forbidden back into the bowl. If someone at the table is harboring cold or flu germs, double dipping that chip back into the bowl would spread some of those germs into bowl where they would be waiting for the next persons chip to be submerged.

By the way, if someone sneezes into a bowl that’s also cross contamination.
That’s what those awkward plexiglass covers around the buffet table are for.

Store raw meats on a plate or drip pan on the bottom shelf of the fridge. This will prevent any raw meat drippings from accidentally getting absorbed into any fresh foods located on lower shelves.

Rinse all fruits and vegetables well prior to cutting.
If there is bacteria on the fruit, whether from laying on the ground or being handled in the store, and you slice it open… the bacteria is dragged from the skin into the flesh of the fruit… cross contamination!

Get a clean knife.
Just grabbing a knife (or spoon or spatula) that was left sitting on the counter could prove dangerous. Let’s say that to butter a slice of bread the same knife is used that spread mayonnaise on a sandwich much earlier that day… Whoops! Since bacteria can begin forming on refrigerator foods left out longer than two hours, some growing germs may have now transferred into the unsuspecting butter.

Wash equipment after using.
Even things like can openers can hang on to bacteria picked up during normal usage.

Dipping the same spatula into several different containers can become trouble further on down the road.
Remember that each food has their own eat by date and if you get some particles of a short shelf life food into a container that should last a long time, then the spoiling process can begin prematurely within the food that should have lasted longer.

Seal garbage.
Keep trash bins away from food prep and clean and sanitize the bins often.

Practice pest control.
Flies, cockroaches, mice and rats often carry harmful bacteria and love to get to get into food whenever possible – don’t let them.

Sometimes people get careless.
So, stay alert and practice safe handling procedures at all times. We really like the USFDA slogan of “Be smart. Keep foods apart.”[3]

Here’s a step by step instruction for disinfecting a cutting board.

For more on general food safety tips, see our list of handling tips.