Dried mushrooms are small and often overlooked, almost hidden on a typical grocery shelf. Packages of dried up little pieces of something brown in a cellophane wrapper may not look too appealing, but they do actually have several advantages over both fresh mushrooms and canned mushrooms. The mushrooms in the back row are straight from the package, while the ones in the front row have been prepared according to the following directions.

Mushrooms most often dried include porcini, cremini and shiitake varieties. 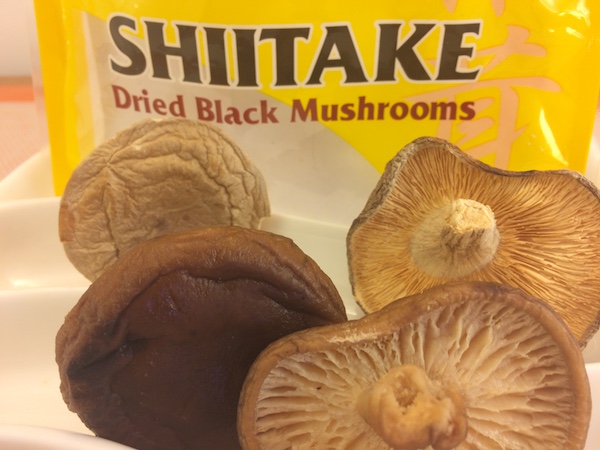 Shown below are dried Shiitake mushrooms. Shiitakes are especially good because of high levels of amino acid glutamate that gives them a potent meaty, smoky flavor. They are the only mushroom that grows on logs instead of in the ground, so they are cleaner than the rest. It’s recommended by chefs to simply wipe them clean with a dry paper towel and then remove the tough stem to prepare them, instead of washing them like regular mushrooms. 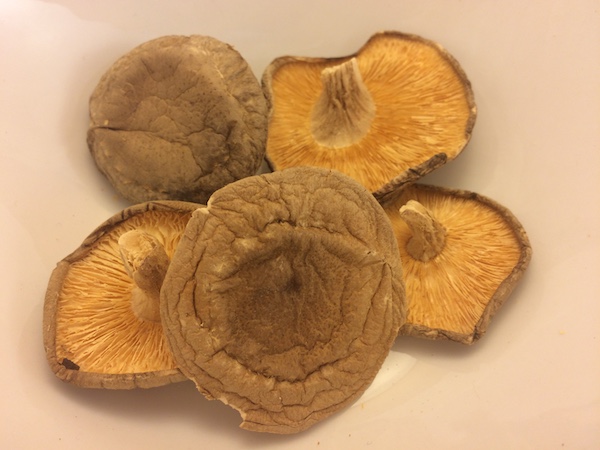 There are several advantages to using mushrooms from the dried state. The next paragraph explains how to use fresh mushrooms and then the remaining paragraphs go on to list other advantages of these little gems. 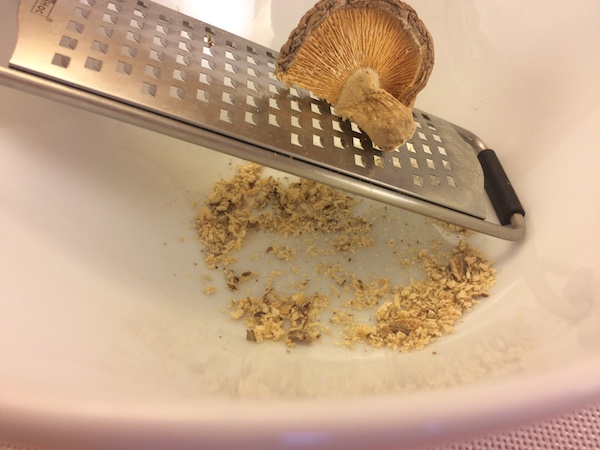 They’re relatively cheap.
They cost about half as much as fresh mushrooms and you get about 9 times as much! Yes, it takes nine ounces of fresh mushrooms to make just one ounce of dried mushrooms!

They are full of flavor.
Dried mushrooms are umami gold! They have super concentrated flavor, far more than canned and even slightly more than fresh. Plus, the liquid that they soak in to reconstitute also provides great flavor (next bullet)!

Get soup at the same time. Save the liquid that was used to soak the mushrooms. Use the soaking liquid in place of water when making rice or other grains, as the broth for delicious mushroom soup or as the liquid in the dish that includes the mushrooms. It will add extra flavor.

Dried mushrooms can be subbed for fresh mushrooms.
Actually, dried mushrooms have a richer, more intense flavor than fresh ones once they are rehydrated. To rehydrate, soak the dried shiitake in boiling water that has been removed from the heat. Soak for 30 minutes. Pat the mushrooms dry after soaking and then use them exactly the same as any fresh mushrooms.

Mushrooms are fungi, so why eat them?
The umami flavor just makes everything taste more interesting.

To find out how long mushrooms last, see our mushroom page.