There were two boxes of Jiffy Corn Muffin Mix left in the cupboard when we reached in to create our easy Chili-Con-Cupcakes recipe last week. One was “best if used by” 2015 and one 2017.

This being 2017, we went with the 2017 box to create the new recipe. But, as you know, couldn’t pass up the chance to also compare these two boxes of corn muffin mix side by side. Here’s what happened when we did. 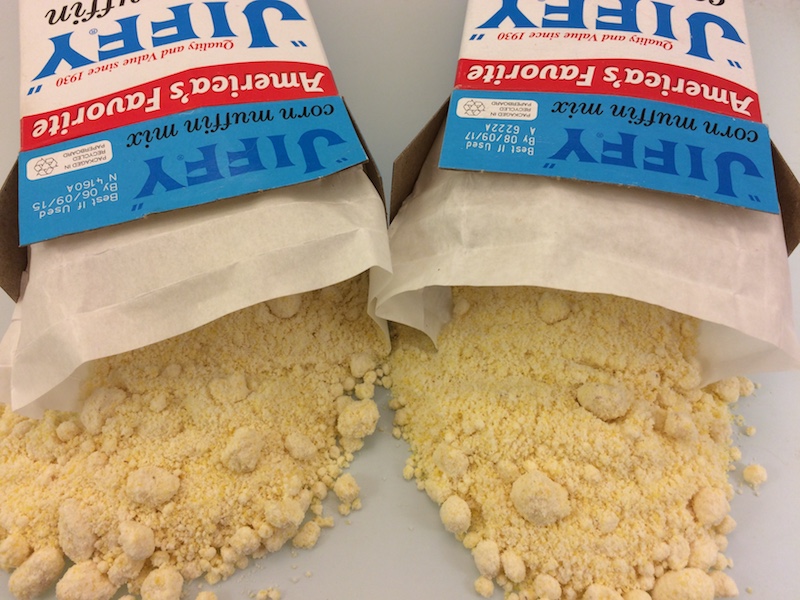 As you can see (that is if you’re good at reading upside down), although the dates are more than two years apart, the two packages of cornbread mix look almost identical both inside and out. Yet, as we all know, looks can be deceiving. They also smelled the same and felt the same, so into separate mixing bowls they went. Both mixes also looked the same heading into the oven.
As they baked, the story changed.

The results were as expected. The baking powder ingredient in the cornbread mix was indeed beyond it’s true expiration date, therefore the “expired” muffins did not rise when heat was added from the oven. Remember how we’re always saying that “foods last only as long as the quickest expiring ingredient in the dish”?. Well, this is a perfect example of that statement.

The corn muffins made with the “expired” mix were flat, thick and dense while the newer box rose as expected. Although the taste was similar (not exactly the same but difficult to describe the subtle difference) the experience of eating the two different cornbread muffins was completely different. It was no contest between the two muffins. You can probably imagine, just from looking at the picture, which one was pleasurable to devour and which one could not rise up to the taste test. (hint: pick the one on the right) 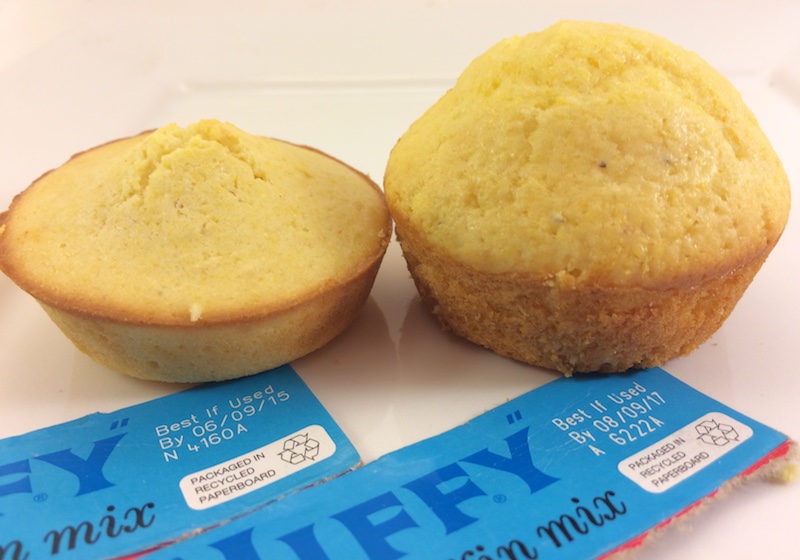 NOTE: We only had one old box of mix, which was a shame but there’s nowhere around here that sells “old” food, so proceeded with two batches of cornbread when really should have had three in order to try adding in some baking powder to the third. We could have split the box, but hate to halve recipes that call for just one egg when accurate results are needed.

To find out how long cornmeal lasts, see our Flour page.