It’s Monday again and as we get further settled into this stay-at-home lifestyle… more and more cupboards are getting into some tip-top shape. Since shelf stable products tend to last much longer than any printed dates may suggest, these cupboards get cleaned far less frequently than the refrigerator. Looking for some variety this week, and using the opportunity to delve deeper and deeper into the pantry as the hesitation and anxiety toward grocery shopping intensifies, we’re wondering why it took us so long to discover this gem of a snack.

Let’s check what we found this weekend. Since today is April 21st (2020) and the Best Before Date on this Almond Butter with Cinnamon and Honey (doesn’t that sound good?) reads “10/13/2018” (according to the manufacturer, that is) we felt it was time to check things out. The “expired” Wheat Thins sitting nearby with a best-by date of “10OCT19” (Oct 10th, 2019) seemed like a fitting match to create a newfound snack.

Sensation or Flop? Following is what we found in this Mondays snack creation. 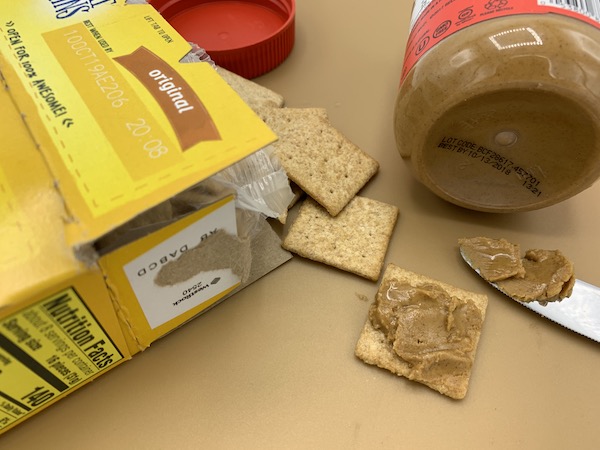 Looking for something to spread this tasty almond butter upon, we found these Wheat Thin crackers. Knowing that crackers are simply stale and don’t taste good if they have gone too far beyond their eat by date, we decided to taste a cracker before proceeding. The Wheat Thin crackers were still crispy and tasty, just as they should be, so we proceeded with the almond butter and knife.

Opening this “expired” Almond Butter container we were met with the pleasant aromas of almonds and cinnamon with absolutely zero of that rancid smell which will accompany nuts and oils that are past their eat by dates. Since the smell was fine, we were pretty confident continuing with a check of the ingredient list to be sure that nothing surprising was included in the jar. The ingredients read “roasted almonds, sustainable palm fruit oil, honey, cinnamon and salt”. Since the first two ingredients tend to smell when they go bad and the last three ingredients never truly go bad, we were just about ready to dig into the jar, after a closer look at things of course. 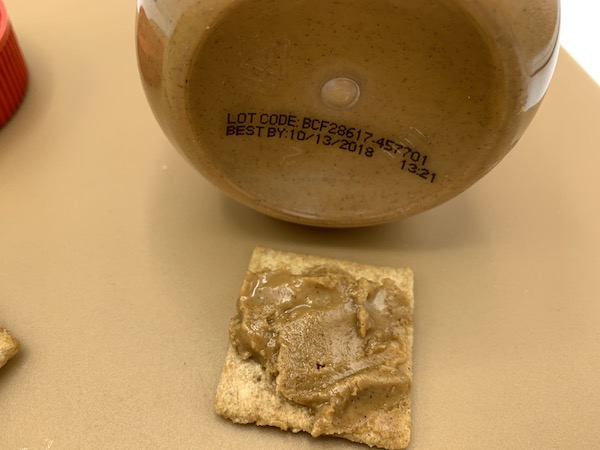 The first thing that was apparent from the appearance is that there was no pool of settled oil on top. That didn’t bother us, as we tend to pour off settled oils from most everything we eat anyways. This particular jar of almond butter may never actually get a pool of oil, due to the use of sustainable palm oil which keeps the natural oil from separating from the nuts. Our first impression when sticking a knife into the center was all about the density of the product. Although “creamy” was certainly not the first word that came to mind as we attempted to spread the dense almond butter across the cracker, it none the less did spread well enough. Although slightly concerned, it felt far better than expected in the mouth and was actually quite smooth and totally delicious! 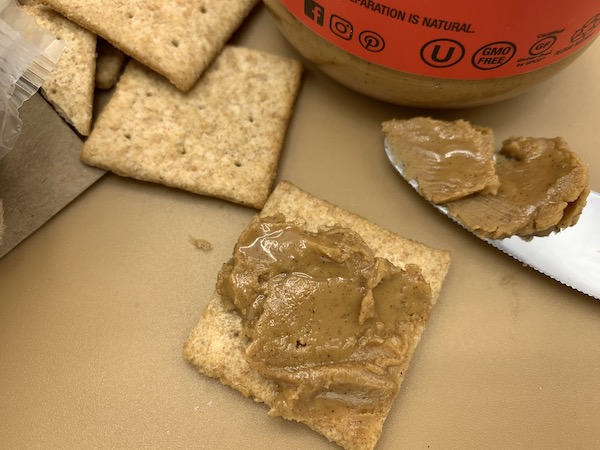 Thinking forward, we wondered how much longer the jar of almond butter would last now that it was opened. Well, sorry but we didn’t get to that test, not a chance. The jar was scraped completely clean Monday afternoon! Next time we’ll have to grab a larger jar.

To explore if peanut butter needs refrigeration, check out our FAQ post.

To see another Monday breakfast, check out these “expired” rolls.