When to Put Oil in Pan

When to Put Oil in a Pan

The best time to add oil to a pan when preparing to pan fry is after the empty pan has been put on the burner and allowed to heat. Heat the pan first, then add oil to the pan. Allow the oil to heat and then let it spread across the pan before adding the food(s). 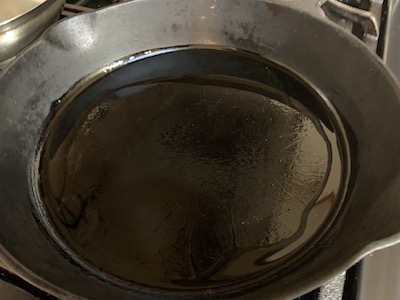 When to Put Oil in a Pan

The Best Time to Add Oil When Pan Frying

Timing is key when adding oil to a pan.
It’s a three step process:

There are advantages of putting oil in the pan at the proper time.
The longer the oil is allowed to sit on the hot pan surface, the more time it has to begin breaking down. If these steps are taken before preparing food, a sizzle of bubbles will appear in the oil around the food once it is placed into the heated pan. If this three step process is followed (heat the pan, then the oil, then add the food), there are several things that will be accomplished:

Need more oil while cooking?
If the pan becomes dry during the cooking process, and more oil is needed to continue the browning, then add the oil slowly along the top edge of the pan and away from the food. Allowing the oil to run down the side of the hot pan will allow the oil to heat, at least somewhat, before reaching the food. Otherwise, the added oil will be absorbed directly into the food.

Caution: Keep in mind that we are talking minutes of heat for each step of heating the pan and then heating the tablespoon or two of oil needed for browning. Oil can burn, some oils more quickly than others, so never leave a pan of oil on the stove unattended since grease fires are extremely dangerous.

Note: We are not talking about deep frying foods here. This is a different process with different precautions where a thermometer is recommended to be sure that the oil reaches a temperature between 350°F and 375°F, depending upon what is being fried.

When to Put Oil in Pan

To find out how long oil lasts, check out our oil page.

Many oils are not suited for high temperatures. Another important concept when speaking of when to add oil to a pan, is the type of oil to use when performing different cooking processes.

Another consideration when pan frying is the type of pan being used. For some options on pot and pan selection, see our recommendations.

Other ingredients that pose timing issues when cooking are spices and herbs.