Block vs. shredded cheese is a question pressed upon cheese lovers every time they hit the dairy case. Are the benefits of shredded cheese worth the added expense per ounce? Let’s look at the whole picture, including shelf life, to see which option makes the most sense. 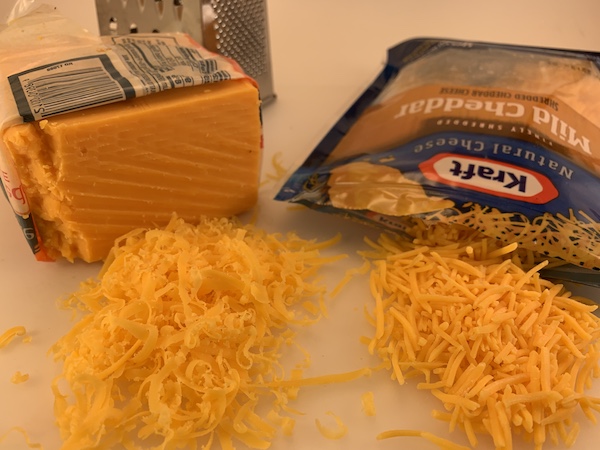 Block Cheese:
This is also sometimes referred to as the DIY version of grated cheese. One has to actually get out a grating tool and either run the block of cheese up and down the stand-up grater or run the hand held grater across the block of cheese. A block of cheese allows for more versatility if a cube of cheese or a slice of cheese is desired, but here we’re just talking about block cheese that is grated as needed.

Shredded Cheese:
The real appeal here is that shredded cheese is ready when you are, no mess and no fuss.
That is the obvious difference between block and shredded cheese, now let’s consider all the differences between the two alternatives.

Taste:
The flavor of freshly grated cheese is richer and with far more gooeyness than pre-shredded cheese.

Texture:
The texture of block cheese that is freshly shredded is softer than that of pre-shredded cheese. Just looking at the picture, this is apparent.

Meltability:
Freshly grated cheese melts smoother and retains a creamier texture once melted than already shredded cheese. The meltability of pre-shredded cheese may be sub par from a block of cheese and, even worse, there may be additives and/or preservatives in the bag. Check the ingredient label to be sure it contains real cheese and only cheese. For instance, this package has added cornstarch to keep the cheese from caking together and forming one large mass in the bag.

Time:
Grating is not a difficult task, nor a big time consumer at maybe five minutes max to shred a medium sized block of cheese. Although, it can get hazardous to fingertips at the end of the block so don’t be a martyr and try to shred that final bite of cheese.

Price:
Block cheese is slightly cheaper per ounce than shredded cheese on a regular basis (generally about 3 cents per ounce), yet this can change with store sales which can make them the same price per ounce at times. Large bags of shredded cheese may be cost effective if some is used and the rest of the bag frozen (see the additional information section below for more on freezing cheese).

Shelf Life:
The shelf life of block cheese is longer than that of shredded cheese. With far more surface area exposed to the enemy (air), shredded cheese is far more susceptible to an early demise and thus has a shorter shelf life than a block of cheese. And, once a bit of mold attaches to a shred of cheese, the entire bag must be tossed. If, on the other hand, a bit of mold begins to grow on an outer edge of a block of hard or semi-hard cheese then it can be cut off to save the rest of the block (with an extra bit of attached non-moldy cheese sacrificed to save the rest – also see additional information below for more on this).

Summary:
Is freshly grated cheese worth the extra effort? We think so.

To find out how long cheese lasts, see our cheese page.

If you’ve bought too much, read can you freeze cheese.