Generally, we urge people to use up any products with a “use-by” date within a day or two of any given date (certain products may go a week – check the individual product pages of EatByDate for the specifics on each product) because there are perishable ingredients within the product. If a product carries a “best-by” date, then this range of true expiration is vastly expanded (although still unique to the product – check the pages).

Yesterdays meal included a package of gravy mix with a best-by date (10/01/18) of more than a year ago. Let’s see how the finished gravy turned out. 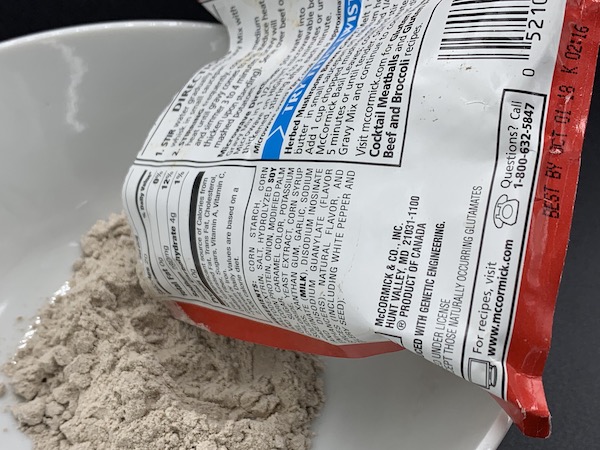 Carefully checking through the list of ingredients on the gravy mix package, there were two that captured our attention. The first was the use of wheat flour and that’s because wheat contains natural oils and oils can go rancid over time – but we’ve got a nose for this one so will deal with that once opening the package. The next ingredient of concern was milk, but milk in the powdered form can possibly last for decades so isn’t of concern today.

Dumping the mix out first for examination, more lumps were noticed in the powder than in a fresher package of mix. This is generally due to moisture. We broke up the small clumps with the back of a spoon, just be be sure there was no reason to believe that they package could have been contaminated.

Taking a good sniff, the nose detected nothing abnormal. The oils were not yet rancid.

The results were pretty good. The gravy finished and set as it should. It poured smoothly and tasted pretty much like any new package of prepared gravy mix would. The slight difference was that some of the oils were beginning to separate and could be detected in tiny circles on the top of the mixture when it was left to sit, but they mixed right back in when whisked. This mix was probably stretched about as far as it should be before the taste would begin to change as the small amount of oil will begin to go rancid with the passage of more time. 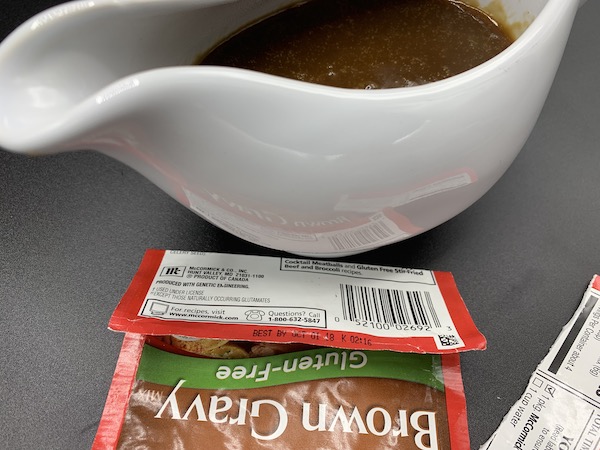 Note: If the oils within products such as wheat flour tend to go rancid before you can consume the product in your house, you might want to consider freezing them.

To find out how long gravy lasts, see our gravy page.